Some of the rituals and symbols of Izumo Taisha, not limited to below, are:

GATE (Torii) is the symbol of a Shinto Shrine. It marks the entry into the sacred grounds of the Shrine.

HAND-WASHING AT THE BASIN is a symbolic preparation for the physical and the spiritual cleansing and purification before proceeding to the Shrine.

SACRED STRAW ROPE (Shimenawa) marks the boundary between the sacred area and secular area. The large rice-straw rope of our Shrine was woven by the people of Shimane prefecture, Japan, and it was displayed at the Honolulu Academy of Arts during its 1994 exhibition entitled “Traditional Japanese New Year‘s.”

A PAIR OF CHINESE LION STATUES are the guardians of the Shrine. These statues of the sacred animal are commonly displayed at the entry to Shinto Shrines.

BELL-RINGING at the foot of Shrine is done by pulling the suspended rope. The jangling of the brass bell symbolically calls attention to the enshrined Kami and pleases them. The ringing also purifies the worshiper.

BOWING AND CLAPPING: After jangling the bell, worshipers proceed to the Offering Box to offer a monetary offering. They perform following formal ritual: bowing twice deeply with hands placed around the knees, then clapping twice or four times (generally clapping 2 times; clapping 4 times is the formality at Izumo Taisha), praying silently, and finally bowing once for the last time. Worshipers may recite this short prayer while praying:

PRIVATE PERSONAL BLESSINGS: The applicant whether an individual, family, business or group, makes an appointment for personal blessings. The priest will confirm and explain about the service. After making an offering, the service begins with the beating of the drum. The priest prays to Kami during the ritual. The worshiper bows while the branch or wand with white paper is waved over his head. After the prayer, all participants perform the Formal Branch Offering. (See below SACRED BRANCH OFFERING) At the end of the blessing service, the Priest will give the worshiper a communion of blessed sake, and Ofuda or Omamori. (See TALISMAN and AMULET below)

PURIFICATION WAND (Harae-gushi or Gohei) is a wooden wand with folded white paper streamers attached to it. It is waved over the bowed head of the worshiper for purification and blessing. The zigzag strips of paper are uniformly used in the Shinto Shrine.

GREEN BRANCH (Onusa and Himorogi) is used during the rituals. Since ancient people used evergreen as a symbol of life and vigor, the green branch has a special meaning in Shinto. In Hawaii, the Chinese banyan is used instead of the Sakaki tree in Japan. A branch about 20 to 25 inches long is used to decorate the altar as the dwelling of Kami, called Himorogi. A single branch of about 25 inches long with zigzag white paper streamers attached to it, called Onusa, may often be used for purification and blessing.

SACRED BRANCH OFFERING (Tamagushi) is a small branch of about 10 inches long with zigzag white paper strips attached to it. During certain services, such as weddings, funerals, ground-breakings, house and office blessings and other blessings, this branch is offered at the altar by the worshiper. Tamagushi means the stick of the soul, the branch connects the soul towards Kami. Shinto ritual places a special emphasis on this ritual. The procedure for making a Formal Branch Offering (Seishiki-Sanpai) is as follows:

Upon receiving the branch from the Priest, the worshiper prays to Kami while holding the branch in front of the altar. Then he turns the branch clock-wise so that the cut edge of the branch is pointing towards the altar. After placing it on a tray or table, the worshiper bows twice deeply, then places the palms of both hands together and claps twice or four times, prays, and finally bows once for the last time.

ALTAR OFFERING (Osonae) may vary. It may consist of a combination of rice, rice wine (sake), rice cake (mochi), fish, vegetables, fruits, salt, and water. The most basic offerings are rice, salt and water, which are the necessities of life. A typical altar offering seen even at homes during New Year‘s is a tray decorated with an orange placed on top of Mochi. Bottles of Sake or bags of rice and any other food may be offered by worshipers.

TALISMAN (Ofuda) consists of a thin strip of wood wrapped in white paper with the name of the Kami written on it. Ofuda is a kind of icon to pray for Kami. It is enshrined in the home altar or posted near the door of the house or office to represent the Kami who is prayed for blessing and well-being.

AMULET (Omamori) are traditional brocade-covered small bags with a strip of the name of the Kami written on it. Worshipers keep it inside their bag or wallet. Amulets for traffic safety also hang inside their car. These are for the protection of individuals.

BLESSED RICE (Osenmai) contained in a white folded paper with characters written on it is cooked together with the regular pot of rice for a blessing for health. 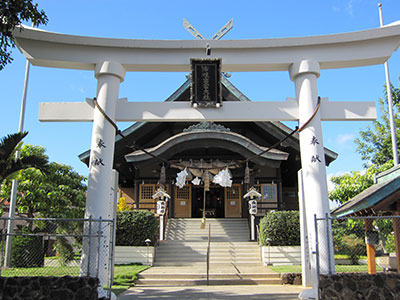 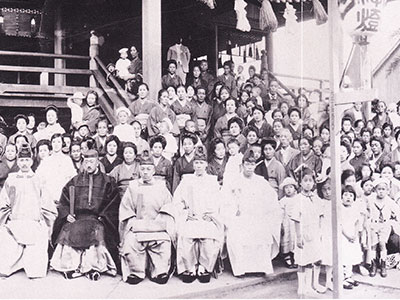